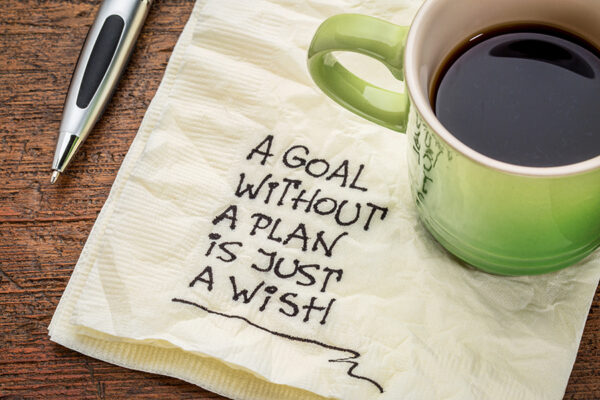 Did you make a New Year’s resolution? Some people do, some don’t. Really, wanting to enact a change can happen at any time of year. The New Yea

r offers an opportunity as a starting point and often we might define goals or challenge ourselves to be or do something different.

Setting goals is good because it sets a direction you want to move toward. But if systems aren’t put in place, well then, good-bye goal. While I think establishing a goal is important, what’s more important is really not the goal, but rather the system that will allow you to achieve that goal. Here is what I mean.

Let’s say a basketball coach wants to win more games than the previous year. He decides a 20% increase over last year’s wins as that would put the team in the playoffs. So if they won 30 games last year, 20% more would be 36 wins. The goal is to win more games. So, during the game, if the coach focused only on the score, would this help with the team winning? I say, no. In fact, focusing on the goal is not going to help the team win.

Systems that get you to your goal is what’s important. In fact, I would argue that you can not focus on the goal at all, but rather your systems, and your outcome will be better. Why? Systems for the basketball team might be introducing more strategic passing plays. Or, establish time in practice for everyone to work on their 3-point shooting to improve over-all 3-point scoring in the game. These are two systems that would improve end of game scoring and help to win games. Therefore, I say don’t focus on the goal, but rather systems. Systems will lift you to where you want to be.

Here’s another example. Your New Year’s resolution is to drink more water. More definitively, to drink 100 oz’s a day. Your system(s) might be to purchase a 100 oz bottle and mark it with two to three hour time hacks beginning after you rise and ending when you go to bed. So, by 10 pm the 100 oz’s of water should be consumed. The time hacks show where the water should be at that time. If it’s not, you know you have some catching up to do. Another system might be placing water containers by the couch, by your bed, on the counter, on your desk, etc. so that water is available everywhere you spend time. This way you don’t have to go to the water cooler, sink or where ever, to get a drink. It’s already there just waiting for you. By focusing on the system, you’ll be drinking more water and meet your goal without really considering the goal.

Losing weight is a common resolution for many people. Instead of thinking of yourself as someone who needs to lose 30 pounds, think of yourself as someone who has already lost 30 pounds. As food choices present themselves, consider what a person who has just lost 30 pounds would eat and choose that. Select the oatmeal over the donut because that’s what skinny (or healthy) people would eat. Act like someone who has already lost the weight.

If it’s being more active or going to the gym four times per week, start thinking of yourself as an athlete. “I’m an athlete, I go the gym four times a week” versus “I’m trying to get my fitness back”. The system would be knowing and planning when you’ll be at the gym and what you’ll do when you’re there—working with a trainer or spending 30 minutes on cardio equipment and 30 minutes lifting weights for example. Acting like an athlete helps your mental psyche to set yourself up for success. Because you’re already thinking of yourself as an athlete, a fitness person, you act like one and go to the gym.

To recap, focus on systems over goal and think of yourself as already the “it” that you’re trying to achieve. This will help tremendously to move you forward to attaining what you want to accomplish. Too easy.

While it’s always good to continue to improve ourselves both mentally, physically and spiritually, never forget that while it’s a new year, you’re just as fabulous as you ever were and have always been. I so appreciate you!

This site uses Akismet to reduce spam. Learn how your comment data is processed.

I was first introduced to the delights of soapmaking through a dear and close friend. I became immediately hooked. The precise science behind soapmaking combined with the creativity of the soapmaker in blending nature’s scents and colors was of great interest and plain fun!